Mow by Design is a family-owned lawn care maintenance company in Fuquay Varina, North Carolina. We also serve many surrounding areas such as Apex, Holly Springs, and Cary. We're proud to provide a full selection of lawn care services, including trimming. Our trimming services include pruning, hedge trimming, shrub trimming, and more! Our trimming and pruning services will help you go the extra mile in making sure that your yard is as polished and clean looking as possible. Scraggly bushes and unkempt kedges are an eyesore; let us help you achieve the best looking yard on the block!

No matter what your lawn looks like, we are here to help make it the best it's ever been! We’re able to trim hedges, bushes, and shrubs multiple times during the season, or on an as-needed basis. This will provide continued growth, optimal health, and your best looking landscape. 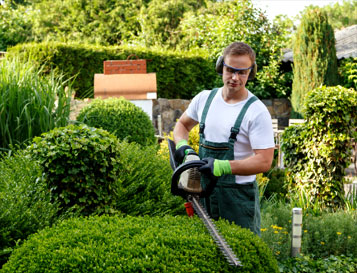 At Mow By Design, we provide trimming services year round. If you’re looking for a manicured landscape all year long, you’re in the right place. We’re able to trim hedges, bushes, and shrubs multiple times during the season. We understand that no matter the season, your lawn needs to look presentable; this is why we can offer our trimming services thoughout the year. This will provide continued growth, optimal health, and your best looking landscape.


WHY IS HEDGE TRIMMING IMPORTANT?

Trimming your shrubs, hedges, and bushes is a task that often goes unnoticed until it is too late. Trimming is an incredibly important part of the lawn care process for the following reasons:

Hedges and bushes need to be trimmed regularly to ensure that they are as healthy as possible. Regular trimming helps to rid the plant of any dead or diseased limbs. Once the dead parts of the bush or hedge are removed, new and healthy growth is a lot more likely to occur; removing the dead wood also reduces the likelihood of insects finding their way into the plant.

If tall hedges are not consistently trimmed, they can actually pose as a hazard to both people and property. A taller hedge that has not been trimmed correctly could result in a larger amount of dead branches; during a storm or heavy winds, these branches could hit vehicles, house windows, or even people. Fallen branches can also pose as a tripping hazard, and hedges that are near sidewalks should be trimmed to prevent overgrowth into the walking area. Overgrown hedges near streets or driveways can also block a driver's view of the street.

One of the most common reasons for placing hedges, bushes, and shrubs in your yard is for increased sense of privacy. Hedges and bushes can help to block nosy neighbors from looking in your windows. Trimming your hedges properly will allow them to fill in and provide more privacy; untrimmed bushes are usually sparse within the center. It is extremely important to trim away plant growth that is going outward or upward allows the plants to fill in around the center.

Mow By Design is proud to be one of North Carolina's top choices for hedge trimming. We care about the work that we do, and our results speak for themselves. Our team of trained lawn care professionals is dedicated to ensuring the best service possible for every single one of our clients. We are proud to serve the following areas:

I truly feel that if you want to succeed in this industry you have to be different than your competitors.

So what makes us different than the majority of our competitors?